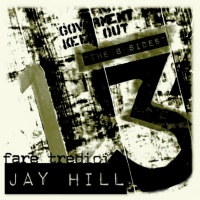 Back in his hometown of Pittsburgh, PA by way of Orlando, FL, Jay Hill has finally dialed in his piano-driven post-grunge culminating in a much anticipated set of songs, as only he can, with his brand of “Funkabilly Rockternative”, that builds off diverse influences like The Beatles, Foo Fighters, Billy Joel, Electric Light Orchestra, Stone Temple Pilots, and Mike Patton.

The stars quickly aligned for Jay after moving to Orlando in 2015.  He was soon accepted by Full Sail University’s Artist Relations director Dale Rock (former drummer of Molly Hatchet) to be one of their recording artists.  With a huge backlog of songs in his bag he hit the studio with Grammy-Award winning engineer Juan Covas and Full Sail engineer instructor Jason Dale and student assistant Addison Rivard.  These sessions caught the ear of Brett Hestla (of Brett Hestla Productions and member of Creed, Dark New Day, and Virgo’s Merlot) who stepped in to not only produce the songs but to even play on some of the tracks.

Under Hestla’s direction, combined with a new wave of inspiration, Jay found himself ultimately shelving the Full Sail recordings in favor of a total of 13 new or re-recorded tracks with Brett himself playing on every song.  Additionally, violinist Tanner Johnson provided extra depth and emotion to compliment Jay’s piano and rich vocals.

Through word of mouth and ample self-promotion the anticipation in this album grew. Soon Jay Hill moved home and was signed to Swade Records out of Pittsburgh, PA with plans to release the songs onto two EPs starting with “fare tredici, the B sides”, a 6-song appetizer featuring “Goin’ to California” which was co-distributed thought Curtain Call Records on April 20th of 2020. The remaining “A sides” will be released later in the year with the follow up album already set to begin production in August of 2020.